I took only one photo today. We’ll get to that later. About 45 minutes southeast out of Wichita Falls, this morning I shouted, “Wow, beautiful pastures”. Put a fright in Tofu, but a little belly rubbing helped overcome her alarm. Yes the scenery was low rolling hills, grass, trees, pleasant.

But I’m on this highway with lots of other folk traveling about 80. It’s not convenient to stop and gawk. It’s better to gawk on the run. Sure There were some places I could have pulled off. But none were convenient. As it was I managed to miss getting onto a road I wanted to travel and ended up getting a lot closer to Fort Worth than I wanted. SoI ended up in this stop and go traffic, where brand new strip malls are being mined at the northern edges of Fort Worth. New housing, Walmart’s,Burger King… everything you kind of hate to see expanding at an alarming rate. For you Texans, I went through Bridgeport, Denton, Prosper, McKinney and Greenville.

When you’re traveling across these States I’ve been through, most of the time the posted speed is 75 mph. It’s definitely made a more attentive driver out of me. I feel as though I’m getting some of those rusted Southern, California driving skills back. Fortunately on those stop and Go miles from Bridgeport to Greenville, I picked up a classical music station on the radio. Slavonic Dances by Dvorak (sp). Then VJ Gupta, the violinist played something restful. At the conclusion the DJ interpreted the foreign title as “Spiritual Rest”. It worked for me. Also a different NPR station popped up and I enjoyed about an hour of that, before returning to the podcast “Slow Burn” which daughter Emily had clued me into before we left Corvallis.

But now let’s go back to Greenville, Texas. It was the last stop and go place before I got back on official freeway I-30. They had me real messed up. Highway 287 was supposed to become I-30. But there was poor signage, so I wasn’t sure I was going the right way. Then I’m sort of wandering through this tiny town with old buildings and no McDonalds or anything representing our postmodern world. All of a sudden I see this enormous old church with beautiful stained glass windows. I quickly pulled into an empty parking place (there many to choose from) as I absolutely had to have a picture of this church. So I leapt out of the car, grabbed a photo on my phone. I got back in the van and looked to make sure the photo was good. Then I noticed a church sign at the bottom of the picture. Take a look as it’s the only photo of the day. 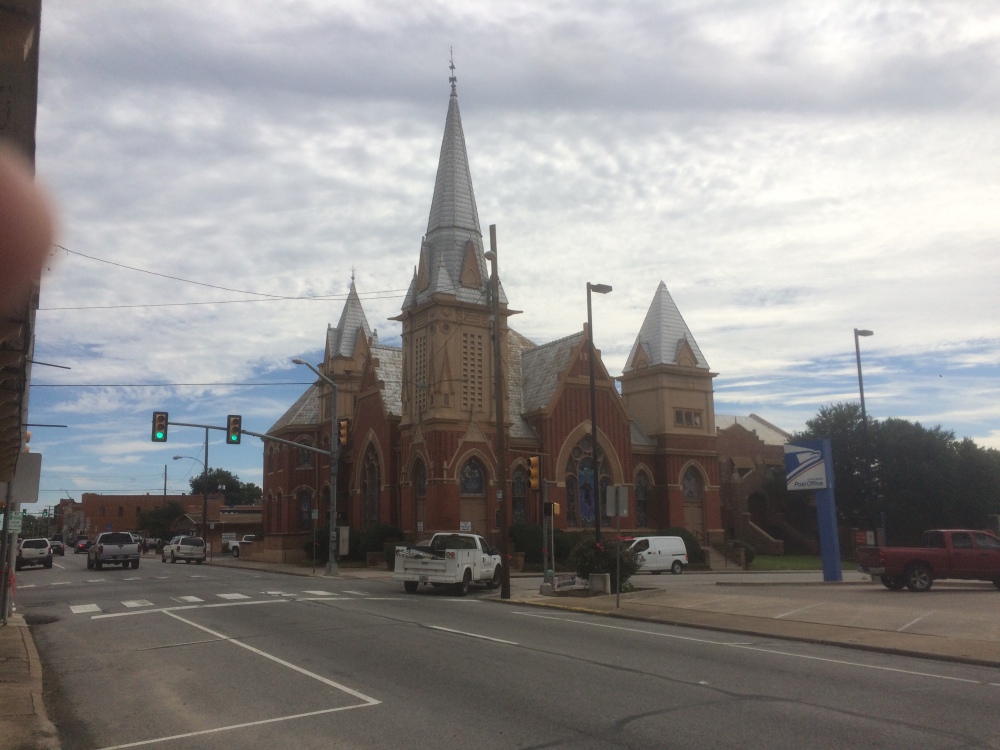 Have you seen it yet?

Well maybe you can’t, but if you get your magnifying glass out you’ll see the red chalice Greenville Christian Church (Disciples of Christ). It’s the only church I saw downtown. If the town wasn’t so broken down someone might suggest that this disproves the adage that “Christian Churches are always built two blocks from success.”

We headed on into Texarkana. I was looking for the motel 6. I saw the wrong one. I got back on the freeway expecting to see a sign pointing to the right one. Seven miles Into Arkansas I pulled off at an exit, got out my google map and realized I’d overshot the mark by seven miles. So using the GPS ( I know I’m an idiot), I allowed the new dangled technology guide me home. It’s a good thing I did cause this motel was almost unreachable anyway. The city has messed up the interchange where the motel is located. You can only get in or out of the place, by keeping a ver sharp lookout for the gravel entrance which is no wider than a suburban driveway. I’ve been out getting an oil change and some dinner. I’ve missed the entrance a couple times and had to circle back to try again. It’s kind of like trying to dock the space shuttle.

Anyway the WiFi is no good in our room. So Tofu and I are in the parking lot by the office. Tofu is getting impatient with me, so I’m going to sign off for the night. It was 71 degrees when we arrived. Tomorrow we head to Memphis. Understand, I don’t want to go into Graceland; I just want to look at it from the outside.

Goodnight to all you good people, and you bad ones as well. Here’s some Love to you from Texarkana.

One thought on “We accidentally went to Arkansas”